If you ring me and it goes to voicemail, I'm on a lesson. I won't answer calls while on a lesson. As well as not being fair to my pupil, it's illegal. Leave a message with a name and number and I promise I'll ring you ASAP. 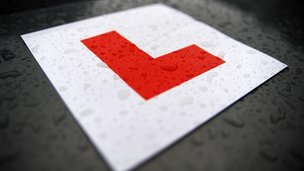 Would-be motorists are most likely to pass their driving test in Downpatrick, County Down, according to new figures.

The statistics from the Department of the Environment (DoE) also reveal that learner drivers are least likely to pass in Londonderry.

But the two test centres in Derry have the lowest pass rates of the 16 centres across Northern Ireland.

The pass rate at Altnagelvin centre, in the city, is just 41.3% and at the Waterside Centre it is just a little higher at 46.1%.

Niall Deeney, a journalist with the Roe Valley Sentinal in Limavady, took his test in Derry three times and failed on each occasion.

"Derry, I find, is quite a difficult place to drive in," he said.

"You've got fairly narrow streets, there's an awful lot of hills and when you're on your driving test it basically meant that every time you had to stop at a junction, you were having to perform a hill hold. For a novice driver, that can be quite difficult."

He researched the pass/fail rates online and decided to apply to do it in nearby Coleraine where the pass rate is 57%.

He passed it there, on the first attempt, and put it down to the flat test route on wide roads.

The pass rate in Downpatrick is considerably higher than the average at 68.1%.

John Williams, who runs a driving school in the town, said he does not believe examiners are any easier on candidates there.

Rather, he said, it may be to do with the layout of the town. 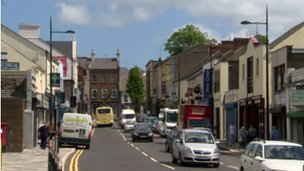 The pass rate in Downpatrick, County Down, is considerably higher than the average at 68.1%

"Downpatrick is quite a small market town," he said.

"You don't have a dual carriageway or ring road; there's only one roundabout. I think other drivers are inclined to give you a bye-ball.

"They're less aggressive than some other areas so that does make things that wee bit easier."

The DoE said their examiners are well trained and "apply the pass standard consistently across all the centres".

It said it has quality control measures in place to ensure that happens and added that local variations are not unusual in other parts of the UK.

In a statement, the DoE added: "It is also worth highlighting that no account has been taken in these pass rates of the variation in experience/quality of driver presenting for test at the various centres across Northern Ireland."